Find Our Store In Indonesia 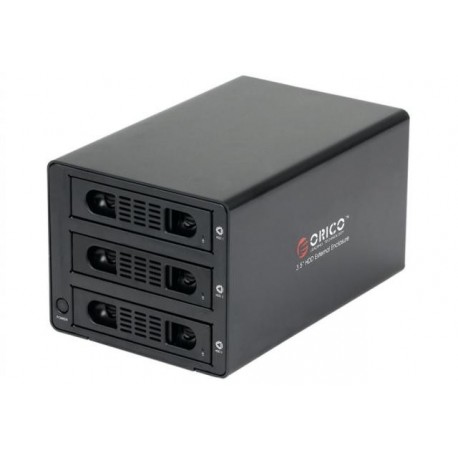 This product is no longer in stock

Notify me when available

Computer can separately detect 3pcs HDD at same time, single HDD support 3TB, total 9TB. That is to say in this mode, it’s same as common HDD enclosure and you can see 3pcs HDD. Under Clear RAID mode, HDD enclosure doesn’t use any RAID mode. The 3pcs HDD in enclosure are in separate operation status, system also detect 3pcs separate HDD, users can select any HDD to store data. If one HDD is damaged, other HDD would not be affected.

Remarks: Correspond to common HDD enclosure mode, you can use one USB or eSATA cable to R/W 3pcs HDD. If use eSATA, the computer host should support PM(port multiplier) function. If not support PM, please buy one eSATA express card, we suggest to use ORICO original eSATA express card(you can’t use baffle plate)!

FAST mode is our familiar RAID 0 mode. In this mode, the storage data is divided into two parts and store in two separate HDD. At this time, the theoretical storage speed of mobile HDD enclosure is 2times of single HDD, the actual capacity is equal to 2times of the smaller HDD’s capacity. The defect of RAID 0 is that if any HDD is damaged, the data in whole RAID can’t be restored.

SAFE mode is RAID 1. In this mode, 2pcs HDD are mirroring. The actual capacity of mobile HDD is equal to smaller HDD, storage speed is same as single HDD. The priority of RAID 1 is that if any HDD is damaged, all the data will not lose, and defect is that the HDD capacity loss is big.

RAID 3 needs at least 3pcs HDD. One HDD is used for data’s storage and error correction. When one HDD is damaged, the lost data can get back from the data in rest HDD by some allocation algorithm. Because RAID 3 put the data dispersed in HDD, the read speed is good, but write speed is slow.

RAID 5 put the original data and corrected data dispersed in all HDDs(need 3pcs HDD at least). In RAID 5 system the data write spread all HDD, this means that the R/W action may happen in one HDD at same time. RAID 5 only use one third disk space to store data, and provides goods cost performance.

l  Intelligent HDD sleep Under RAID mode, if no data R/W to HDD in 5minutes or pull out cable, HDD will enter into sleep mode automatically, LED indicator will stop light and fan stop running

No customer reviews for the moment.